Powerdreamcouple part 2. Director Elisha Smith-Leverock has been going back and forth between fashion and music.

Her fashion films collaborations with designer Fred Butler, scored by Benjamin Esser, have been both acclaimed and rewarded.

She made the first music video for Esser before directing for Cocknbullkid, Pixie Lott, Sunday Girl and now… Esser. 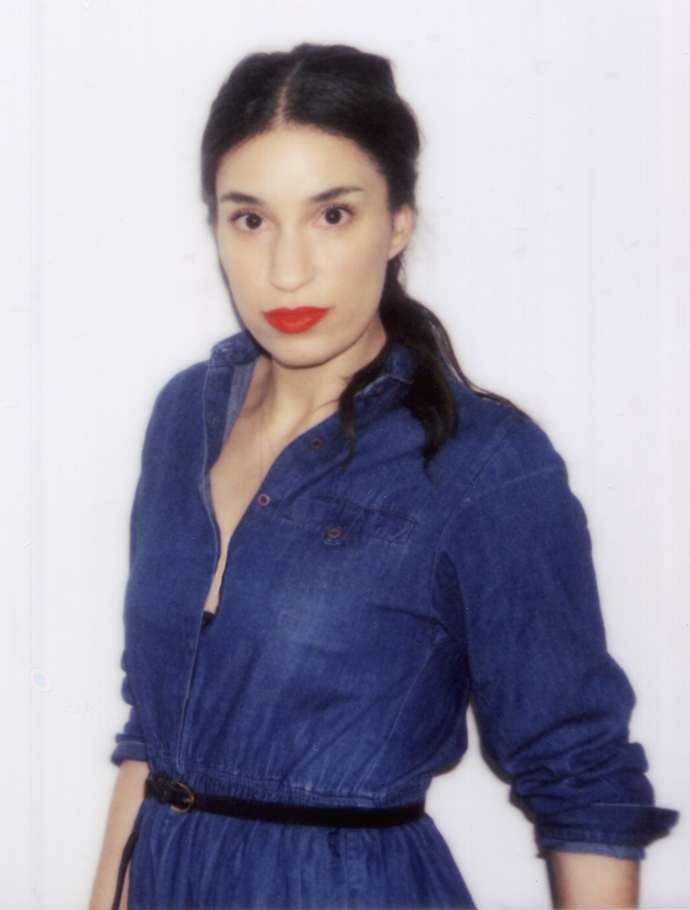 Your new video for Esser is very strong, and seems to show more confidence, perhaps because of the success of “I Want Muscle” ? I would like to hear your thoughts on “I Want Muscle”, how the story was perceived and how difficult or easy it was working for the film.

I think the Esser video and I Want Muscle might seem more confident because they are both very personal projects.

Making ‘I Want Muscle’ was a great experience. I set out to explore what physical strength can mean for women and I also wanted to challenge and expand peoples ideas of female beauty.

Obviously there were some difficulties, especially trying to find clothes for Kizzy to wear. Some designers just flat out did not want their clothes to be seen on a bodybuilder and others were willing to lend but sample sizes are generally tailored to fit a very specific kind of figure, so they did not fit her.
The reactions to the finished film were overwhelmingly positive, from winning the ASVOFF Grand Prix, down to the number of people that watched to film and how they reacted to it.

A lot of people have said to me that they had never seen a female body builder portrayed in this way, without the fake tan and irony. But there was a time when people were more appreciating of ‘strong’ women and different body types, just think of Lisa Lyon for example.

You made, if I’m not mistaken, the first music video for Esser, as well as the one for his hit “Headlock” – how is it working with someone you know intimately, to be simultaneously in tune with his world and able to step back to connect it to a bigger picture?

It’s the best and the worst thing at the same time. It’s amazing because you have great mutual trust and it’s really easy to communicate and yet it’s the scariest thing because you feel so much more pressure. You don’t want to let the other person down when they have done something so great and have worked so hard for it. You don’t want to let them down by not getting your end right.

When I shot Ben’s first video and successively the video for Headlock the approach was somewhat naive. These were also amongst my first experiments with moving image and it was really fun because Ben was just finding his feet as a solo artist so we both didn’t feel any pressure going into it.
The process for his new video was more conceptual which very much mirrors Ben’s approach to making the track.

What are your inspirational catalysts and how they help you form what you do today?

Most recently I’ve ben watching a lot of Hans Richter films, this has been a great influence for the ‘Enmity’ video.

How do you approach making music videos versus fashion films ?

I think generally making fashion films gives me a little bit more freedom so my approach varies. It will alway depend on if it’s a personal project where fashion aspect is a byproduct to the story or the visual idea or if I am working with a specific designer to actually showcase their collection. With personal projects the idea is more important to me than the clothes but obviously if working for a designer then you need to focus on showing the collection as well. I think this approach bares similarities to how I do music videos.

With music videos, the idea/concept always becomes secondary to how the artist is presented.

How do you see the future of fashion film ?

I’m not sure how the future will be but I know how I would want it to turn out.
I would love to see a stronger move towards actual content. Director-driven fashion films. Less ‘moving photographs’ as I like to call them. Whilst these type of films can be beautiful, I personally don’t find it very interesting to make them or to watch them. Seeing someone swishing around for 3 minutes gives me nothing.

I think its far more interesting to watch something more abstracted, a story or mood film that tells me more about the ideas behind the collection. A well crafted film that really brings you into the world of the designer and the collection rather than just straight up showing the clothes.

What is the last thing which stimulated you ?
Charles and Ray Eames.