YELLE — Julie, Jean-François and Tanguy — burst onto the music scene in 2006 with their UFO bubble-gum-techno-rap “Je Veux Te Voir”. Since then they’ve collaborated with the likes of Katy Perry, Crookers and Robyn, and seduced audiences all over the world. They’re basically the first French-singing band to achieve international success since the Rita Mitsoukos. Now they return with their second album, SAFARI DISCO CLUB. 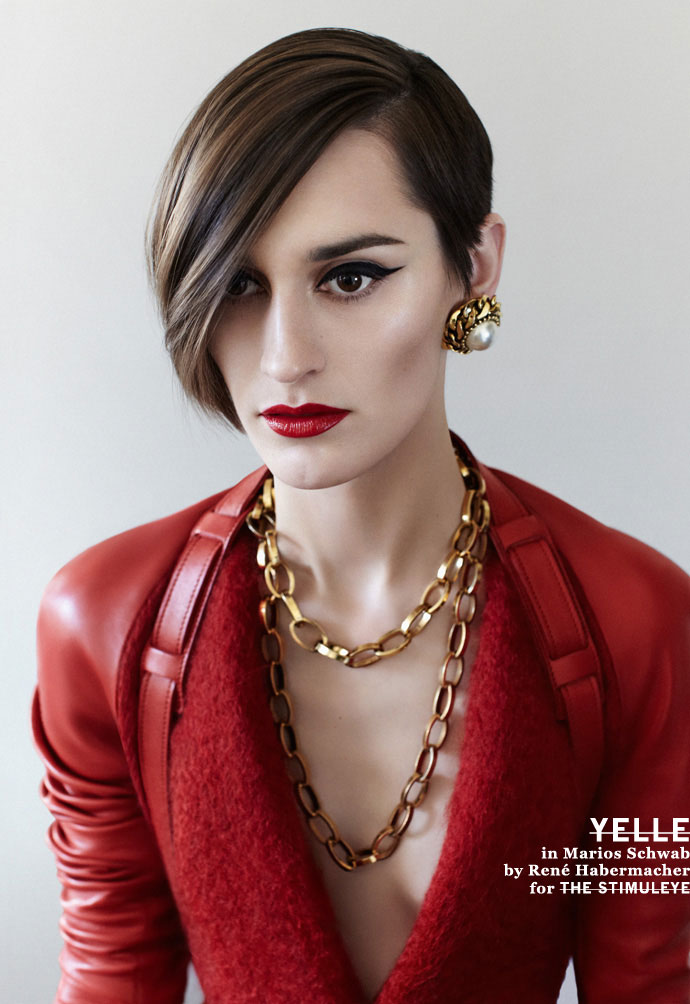 ANTOINE ASSERAF: Let’s talk about your new album first, SAFARI DISCO CLUB, there’s an immediate visual concept from the name to the album and on to the double music video…

JEAN-FRANÇOIS aka “GrandMarnier”: Actually it’s something that was not there to start with but added at the end. We found the name SAFARI DISCO CLUB very late into the process, at the last minute almost. We thought we should keep things simple, find 2 tracks from the album to start with.

The most inspiring track in terms of visual adaptation was SAFARI DISCO CLUB. This double-theme made us naturally think of Jean-Paul Lespagnard [whose styles had inspired the CE JEU video] and his penchant for double-themes, for juxtapositions. So we discussed it with him, with some references such as the final scene of Luc Besson’s SUBWAY, in explorer mode.

JEAN-FRANÇOIS: It turns out that Julie’s hair in the video is not far from Isabelle Adjani’s, but that’s pure coincidence…

But the explorer look, that was something stuck in my head — it’s a bit why I started to get into music:  I was such a big fan of Jean Reno playing the drums in the subway as a kid, it left an impression on me. So this final scene where they play music dressed like explorers was the starting points for Jean-Paul to work from…

So, do you feel that this SAFARI DISCO name applies to the album as a whole ?

JEAN-FRANÇOIS: It definitely gives a tinge — from the moment we had the title, we listened to the tracks differently, you hear the percussions more. The word “safari” also brings the meaning of “discovery,” which works because we had applied ourselves to making all the songs very distinct.  We feel very much part of the compilation generation!

It all works out in the end, but once again it wasn’t thought out that way, we made the songs really one by one. 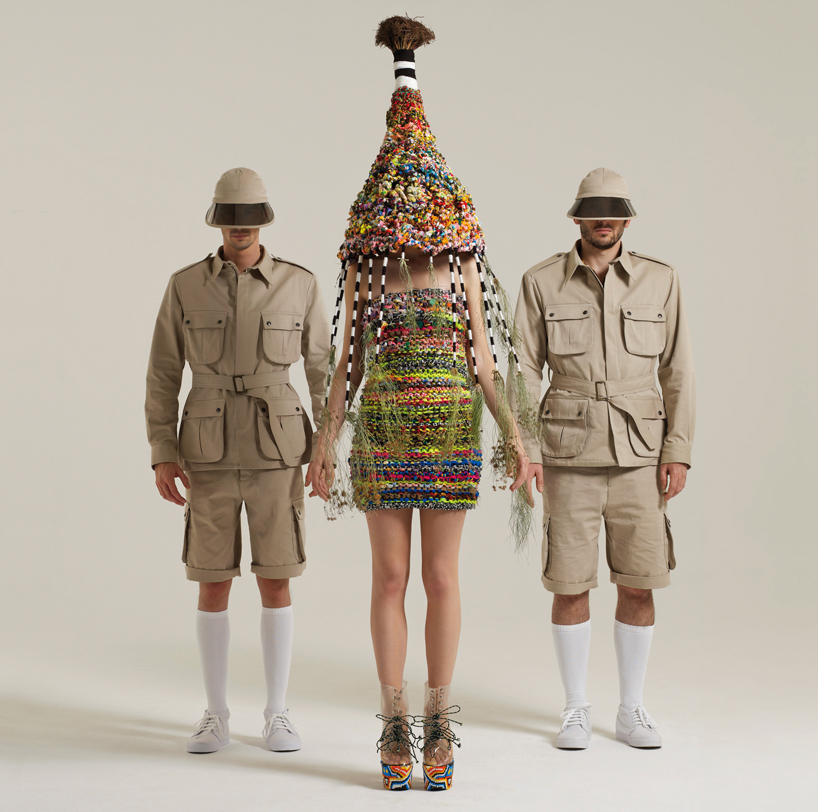 JEAN-FRANÇOIS: There is a percussion side, coming from the live… Julie has a Tom Bass, we have these suspended drums, we really base ourselves on the percussions for the live show, constructed a bit like a  DJ set, with transitions — that really rubbed off on the way we composed for this album.

TANGUY “TEPR”: We didn’t want to copy anything, it’s just a slight tinge, nothing too ‘in your face’…

JEAN-FRANÇOIS: On SDC itself, the most obvious thing in terms of inspiration is the guitar gimmick which is almost Zouk.

Both LA MUSIQUE and SAFARI DISCO CLUB are very instrumental tracks, very percussion-driven, you’re in a sonic trip with words just guiding you on your way…

JEAN-FRANÇOIS: The voice is used more like an instrument, on POP-UP it was more spoken.

TANGUY: Julie’s way of singing changed, not in a calculated way but gradually while writing — it was very spoken and broken on POP UP,  on SAFARI DISCO you find this style only on one track really: COMME UN ENFANT.  We wanted to try new things.

And yet QUE VEUX TU is very classic pop…

JEAN-FRANÇOIS: SAFARI and QUE VEUX-TU are the 2 extremes on the album, that’s actually why we are releasing them at the same time. SAFARI is different for us because there’s a breakdown on the chorus, while QUE VEUX-TU is more classic… the album goes back and forth between these two moods.

How do you feel you’ve evolved since your first album, musically, visually and personally ? It feels like you know where you’re going more…

TANGUY: We worked with [our label] Source before releasing POP UP, and then between the release and the last tour date in 2009, the label disappeared and we became “label orphans”… all the people at the label really worked hard for YELLE, we were in a kind of symbiotic relation. You start alone, you meet a lot of people, and the you end up alone…

It helped us find our ground and think things out a bit better – we created our own label [Recreation Center], and we realized we could do a lot of things ourselves…

JEAN-FRANÇOIS: For the evolution, we were touring to support POP UP for 3 years, we really gave it all our energy, with tours getting bigger and bigger each time: first 3 shows in USA, then 8 with Coachella, then 25, twice Japan, twice Australia, 3 times Scandinavia… bigger venues, more people… in the end we’re the ones who said “we have to take a break” – we were tired, thin even, we wanted to think about the next phase – so we went home, we got some rest, and then we started getting depressed…

Then we started writing, in a cabin in the middle of the woods of Brittany, to get things started. It was a mix of excitement over starting something new with the melancholy of everything that had happened, and you feel it in the album, this need for energy.

Often you hear about bands on tour who have tons of ideas and record right away — somehow it was not your case ? (laughs)

JULIE: We take notes, Jeff sings some beats, but we really need to be in the studio to get to work.

JEAN-FRANÇOIS: We don’t write on the road because it’s not as easy as picking up a guitar — we need to let it simmer, there are no rules for us, we’re not in a method of looking for riffs like a rock band. We find an idea, we put it aside, then we rework it in detail, and the boil it down to the essentials because we’re in a fantasy of “less is more.”

We got a bit older. POP UP was written 5 years ago, we’ve evolved visually as well – we try to refine things. We have another fantasy, which is to mix fun and elegance, that’s what we’re aiming towards… That’s also why we worked with Jean-Paul Lespagnard, we share that with him.

That leads to my next question – I’m tempted to call YELLE a project more than a group — so what is essential to the Yelle project ?

JEAN-FRANÇOIS: It’s funny because actually it’s something that comes up a lot – we don’t really like the word “project” because everything in Yelle is built on top of the music, afterwards. Never did we think “we’re going to make music in this style: colorful”… 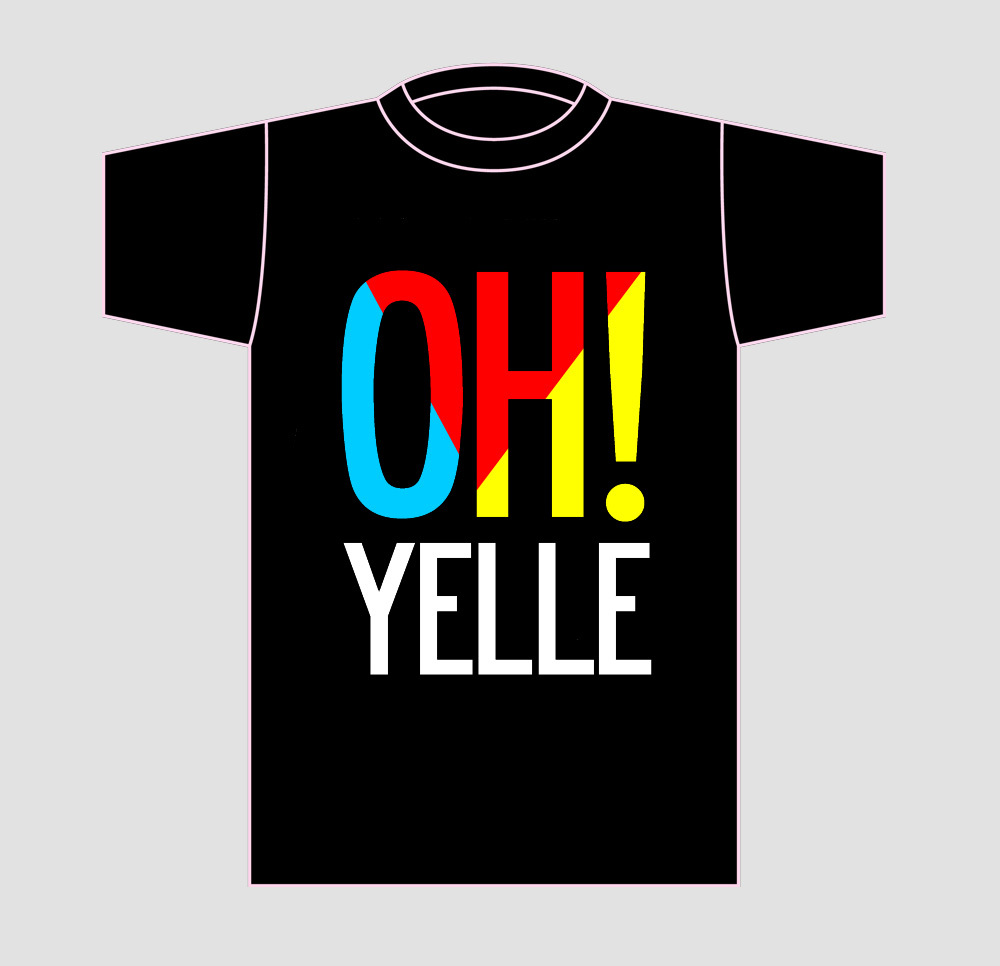 With a friend of mine, years ago, we had decided to make a band but went about it all wrong, we spent tons of time choosing the name, then thinking of the music video… we were out of ideas before we even got to the music.

JEAN-FRANÇOIS: It’s a bit risky to begin this way, in fact everything that accompanies the music was done by excitement:
because when you have songs it’s nice to make cool things to go along,
when you’re on tour people you want to give tshirts that people are asking,
when you make a video, you want to learn something, not just make a video for the sake of it,
and the implication in all these elements which revolve around the music, they’re not things that are planned from the beginning, they come as the music develops.

We ‘re all musicians without being purists, we’re from an advertising generation, so we’re open to proposals for branding. Pop culture, logos… it’s our generation.

JEAN-FRANÇOIS: That I can understand a bit, especially everything concerning extras, because we like making remixes, but we like doing them our way, through our own connections. But when it’s iTunes saying “you need 5 remixes and 1 cover”, because they need “versions for countries”… it’s something else if you can’t synchronize it with real connections. On this album we were lucky to do that with the 2 covers, “Low Fi Funk” and “Fortune”, who are friends, but on the first album we didn’t know anyone, and it felt bit random to go knocking on doors: “knock knock, could I get a remix please?”

When it’s forced it’s a real drag, but it’s no reason to become so reactionary…

It really depends on your audience — I’m guessing the Portishead audience loves it when they hear YOU WON’T GET ANYTHING. (laughs)