RENE HABERMACHER: Let’s speak a little about your new play: INSIDE.

DIMITRIS PAPAIOANNOU: INSIDE is a work born where two situations come together. The first is a show that runs endlessly without beginning, middle or end. The second is a situation in which audiences are allowed to visit at any time they like, sit wherever like, and are free to leave and return as many times as they like. The theatre doors open at 17:30 and close at 23:30. The stage action begins before you come in, and continues after you leave. Nobody sees a beginning, or an end. The play recycles itself, but never repeats itself. 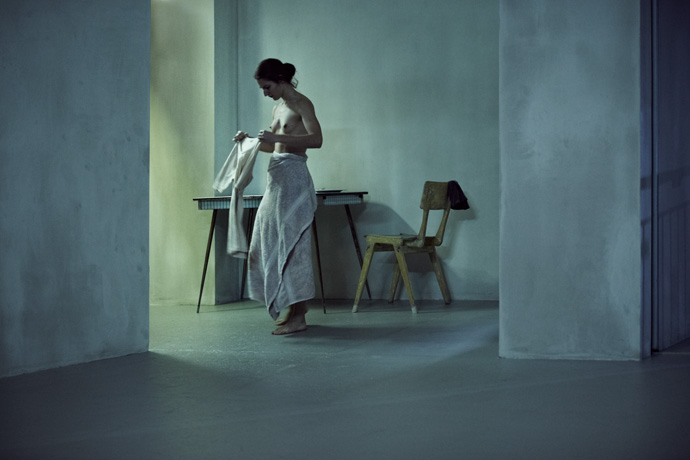 What you see is a composition, a series of everyday private movements and actions that are exactly the same, repeated multiple times by 30 performers in various overlapping and recycled versions. These phrases come together, then one remains, then another five come into play. It’s about density and overlapping forms. An ongoing open composition that encourages audiences to create their own compositions, depending on how many times, how long and from which angle they choose to see the play.

This is an idea that intrigues me, that people in the centre of the city will visit a theatre to watch others doing things that they do themselves, and the people they watch are themselves watching the city through the window. This is something I feel is charming.

It is these two elements — that of the city documentary exploring a place common to all, and the freedom given to audiences as to how they can view the work — that come together in my view to create this project. The subject of it is one level, the form of it is another, and both are conceived at the same time. This is what interests me, and this is why I am doing it.

So this is what INSIDE is.

I don’t know what people are going to do and how audiences will make use of this game that I am proposing. It’s something of an experiment, we’ll see how it’ll work. 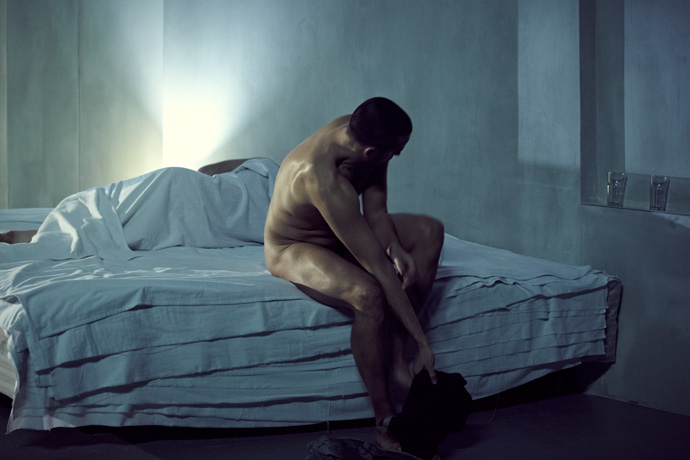 It reminds me of the photographs of Eadweard Muybridge for example, or the performances of Marina Abramović.

Abramović has these elements of patience, and of exhausting the human body. She has done one performance [“The House with the Ocean View”, 2002] where she actually lived in a gallery, in public view, which resembles what I am doing. But my work is not performance art, it requires rehearsal and it will repeat itself everyday; it’s not like an algorithm that evolves organically in front of our eyes. That’s why we are doing it in a theatre and not in a museum or gallery, because it is a kind of a twisted version of a performance, but not performance art. It is something that is rehearsed, that has an acting tone, and is not personal like most performance art, which is about a specific person doing something in that moment. Of course, this experiment of mine would not have been possible if performance art had never existed.

INSIDE reminds you of Muybridge because it gives you the chance to see and imprint in your head the successive stages of a movement, just like Muybridge did in his photographs. They also share the element of observing people: how people move, how they walk.

It’s like filming a documentary in the savannah: you film for hours following a lion and then you have 15 minutes where the lion sits doing nothing. We are taking these 15 minutes of footage of the lion making slight movements and superimposing it many times, through shifts in the timing, to create an entire play out of it. It is still the lion. It’s still about observing the lion. The lion does nothing new. But hopefully we will be magnetised by these successive of layers of the same action taking place, and start meditating upon our own lives.

That was a good example! We are becoming very abstract and intellectual now. 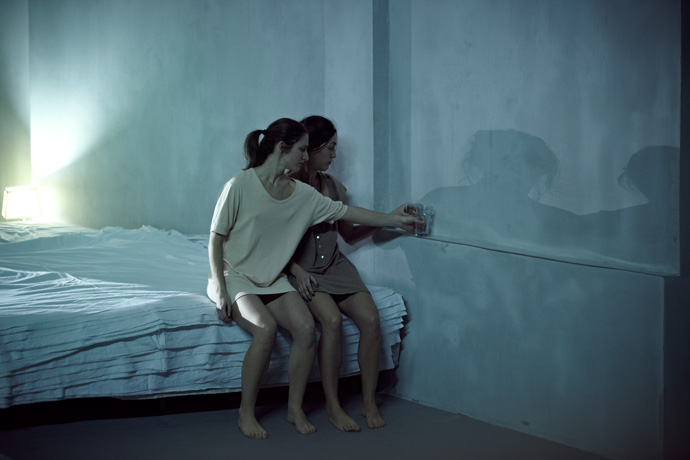 I understand that this idea for INSIDE has been in your head for quite a while now.

It was the first thing that came into my head after 2004, the first thing I wanted to do and found worth doing. Back then I had the idea of this room, and of creating a composition from a single simple series of movements by multiplying and superimposing it. Within the framework of a two-hour show, this seemed ridiculous — this limitation would have strangled the idea, forcing the whole thing to have a conclusion, a climax, a very specific story to tell. It would also seem like a joke to audiences, setting them up for something with a beginning, middle and end and then presenting them this thing repeating itself and multiplying, waxing and waning before their eyes, without giving them the chance to leave whenever they want. So I didn’t do it.

Last year, I made the leap in relation to the way the theatre itself could function: I could create a very long show and give people the freedom to come and go as they please. I had to deal with the logistics of the thing, but then suddenly a form was created in which this content could take place. Because once you liberate the audience from having to see it all, then you also liberate the show itself to develop in ways that do not necessarily lead to a defined conclusion. So that is why it is happening now, because it took me some time to conceive the framework within which this could function.

There are some recurrent elements that I always see on your mood boards, in your work, in your references, and last week I saw a key element once again: the kouros.

That one always returns, either standing or fallen.

I deeply apologise, I cannot help it! Some things come back again and again, you know, until everybody will just be exhausted by it and nobody will ever visit anything I do ever again! 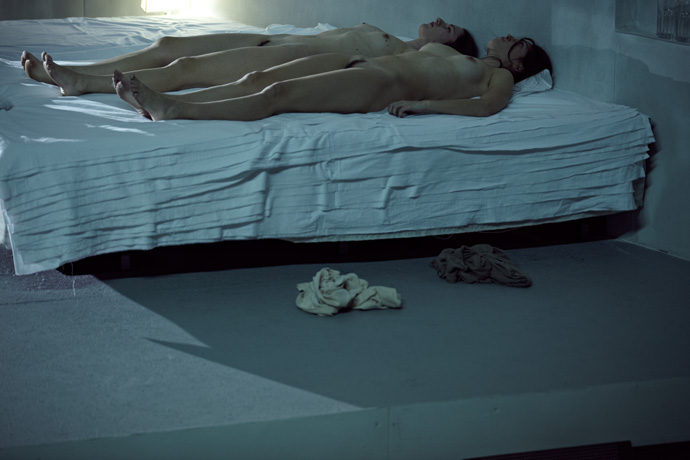 Would you say you have an obsession with what the kouros represents: beauty, nobility, youth?

It’s not about youth. It just happens that I work with people who are quite young. I’ve never flinched from the idea of worshipping the structure of a human body: I like the body. I like looking at human bodies. There is something about beauty that charms me and puzzles me and magnetises me.

I have a certain understanding of the human presence, of the human body situated in space and against the vastness of the sky of existence. I usually have people looking at landscapes. I think in every play I’ve done, I’ve had someone looking at something. This is something that maybe comes from me: I tend to breathe things in by looking at them.

When the kouros came to ancient Greece from ancient Egypt, it took one giant step forward: extracted from his background, the axis of his body shifted over his two feet. So for the first time in history, there was a life-size sculpted human figure that could be seen from all sides. And this coincides in ancient Greek history with the dawn of poetry, of lyrical poetry, where people started to talk about how they feel. For me, the kouros is more than a celebration of youth and beauty. I think its more the celebration of wandering. A figure standing on earth, wondering about its own position in space. Wandering in space: where do we stand, where are we? You know, it’s a common puzzle for us humans, and it attracts me. My work reflects that I guess.

Is that enough, dear? Do you want more?! [laughs] 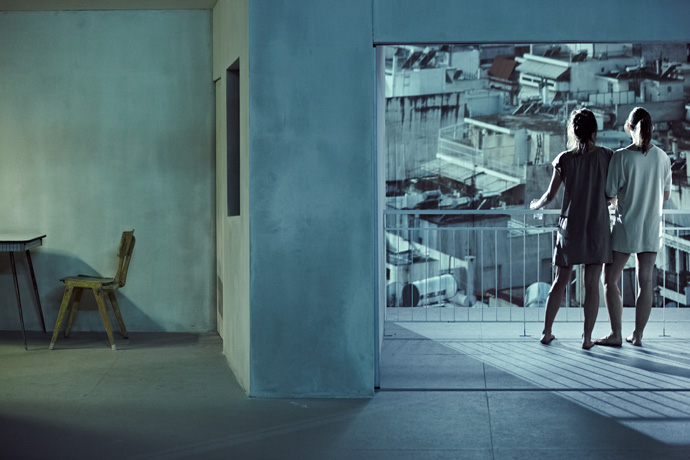