Planet Earth is at the center of an observable universe with a 13.7 billion light year radius. Just so you get an idea of what that means, the Moon is only 0.0000000406 light years away (about 357,000km, if that makes it any easier). Paul Klauninger is an astrophotographer who captures some of the beauties of our galaxy, and has been doing so for over 20 years.

Astrophotography remains one of the most complicated forms of photography, but with today’s technology we get images not even Galileo or Newton would have even dreamt of. The Stimuleye catches up with Paul to get a better understanding on this ancient fascination for the Cosmos. 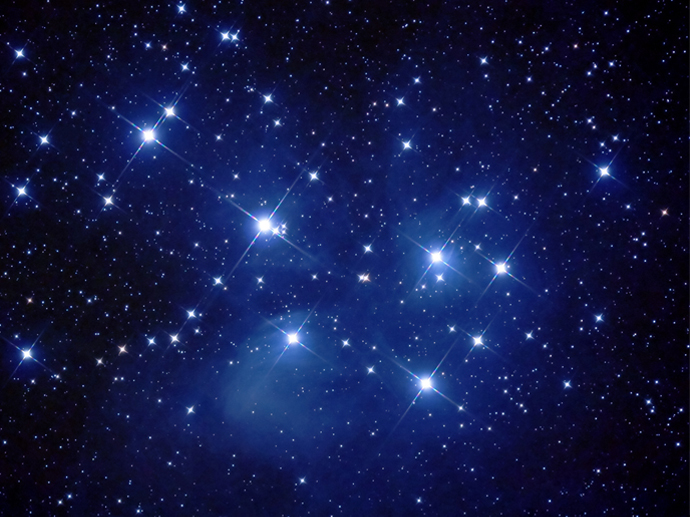 Miguel Batel: You must be happy winter is over. Last time we went out to the field must have been one of the coldest experiences I’ve ever had.

Paul Klauninger: I have mixed feelings about the winter really. While it can be very challenging to operate your equipment (and your fingers, for that matter) when it is –20o C, there are also a number of benefits. In the winter, the nights are much longer than the summer, so you can do much longer observing and imaging sessions. Also, the air tends to be cleaner, containing less dust and water vapour. That makes it better for imaging. And in the winter, you see a different part of the sky than in the summer, so you can see a completely different collection of celestial wonders. Finally, there are no mosquitoes or black flies in the winter, and that’s always a good thing.

MB: Being mostly subjects you can’t appreciate with your naked eye, or directly interact with, I’m curious to know what kind of emotional attachments you develop with your photographs?

PK: I guess my images are like a photo album of travel pictures, in that they remind me of places that I have visited. While it is true that most of the imaging subjects cannot be seen with the naked eye, my telescopes do in fact, allow me to see these without a camera.

When I look through a telescope at a nebula or galaxy that is thousands or millions of light-years away, I can’t help but wonder about other Earth-like planets in those places, and the potential for other advanced civilizations like our own. And when I see the images I’ve taken of those same places, they remind me of just how much more is out there that our limited vision cannot detect directly.

MB: Which have been some of your most significant or revealing photographs?

PK: One of my most favorite “revealing” images is one I took of the Pleiades star cluster. This is an object that you actually can see with the naked eye. It appears as a small dipper-like formation of seven very bright stars, just to the right of Orion. Not only does the image show these seven stars as brilliant blue beacons in the night, it shows hundreds of surrounding, lesser stars that are also part of that cluster. And the entire collection is wrapped in an ethereal, misty blue nebula. Photographically, it’s just a strikingly beautiful object.

Another favorite is actually a series of images that I took over a span of a few months of a very odd object in our solar system named Comet Holmes. Back in 2007, this dim, obscure little comet suddenly and explosively erupted. In a matter of 24 hours, its brightness increased by a million-fold and it easily became a naked-eye object. Before that, you would have needed a large telescope and sensitive camera to even capture it as dim speck of light. In the weeks after its eruption, it continued to expand and grow until it appeared larger than the full Moon, although nowhere near as bright. However, you could easily see this object as large round fuzzy patch in the sky. It wandered around the sky like that for months, until it gradually faded. I captured a series of images over that time period that nicely shows its growth and evolution. To this day, no one knows what caused this comet to erupt as it did. 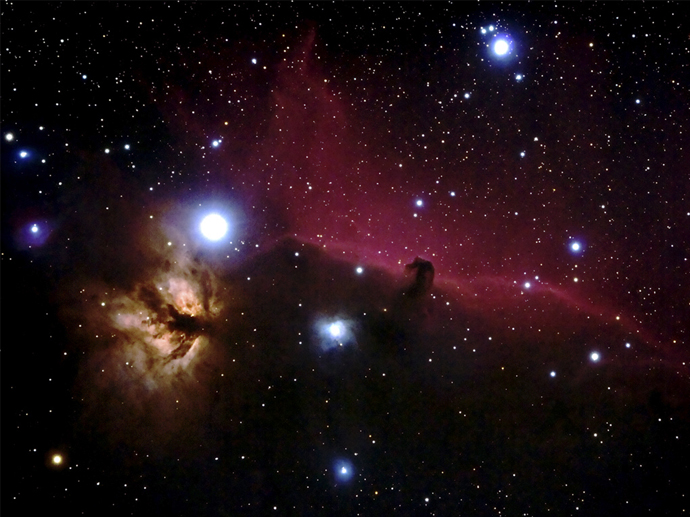 MB: The final image is a result of combining several exposures and filters, but how much creative input do you have on them?

PK: Actually, you have a fair bit of creative input as far as the final image is concerned. Many objects, such as the Orion Nebula for instance, have a very wide range of brightness. You have to layer several images of different exposure lengths to capture the entire range. For example, if you do a long exposure to capture faint nebulosities, you’ll wind up completely saturating the brighter areas in the image and therefore loosing the detail in those areas. By selectively layering and enhancing different areas, you can catch all the action.

MB: There are wavelengths of light and gases that camera sensors are not able to pick up. What percentage of the real deal do you think we are able to capture with the available technology?

PK: Well, from an imaging point of view, I’m personally still only capturing that portion of the electro-magnetic spectrum that is visible to the human eye. This is only a tiny fraction of all the energies that are routinely emitted by objects in space. But if you look at all of mankind’s current astronomy endeavours, we can actually “see” these other portions of the Universe’s energy spectrum. That is because nowadays we use not only visible-light cameras, but also radio telescopes, and telescopes designed to view and capture images in the infra-red, ultra-violet, x-rays, and gamma rays. In this way, we get a much more complete idea of how the Universe operates, because we see such so much more of all the underlying processes. 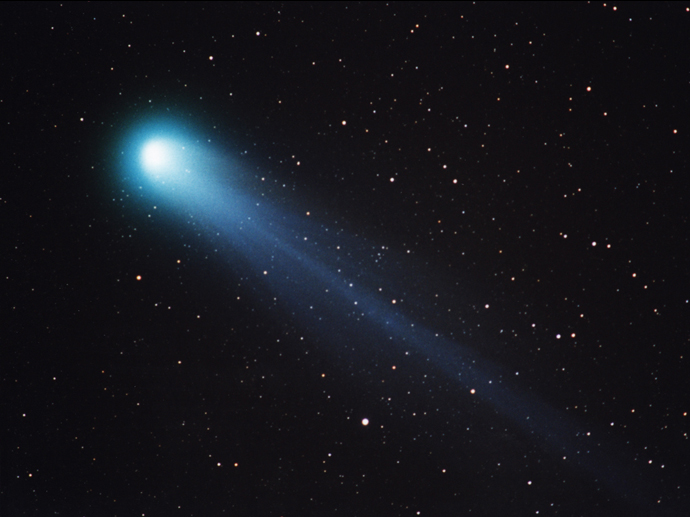 MB: How far into space can we see with these instruments from earth?

PK: Well, the answer is quite far actually. As an amateur astronomer and astrophotographer, there are a number of objects such as distant galaxies you can capture that are many hundreds of millions of light-years away. There are even a few objects such as quasars that are a couple of billion light-years away. That’s pretty impressive using off-the-shelf amateur gear. And of course when you look at the professional level, the Hubble Space Telescope can record galaxies over 90% of the way across the known Universe.

MB: Which are some of the most challenging factors of astrophotography?

PK: There are a few.

When you are using a large telescope to take an image, its alignment to the stars and its movement to compensate for the Earth’s rotation must be very very precise. Otherwise the stars will appear as streaks, not as points of light. The reason for this is that unlike conventional photography, when you are imaging a galaxy or nebula, typically your exposures last anywhere from 5 to 20 minutes. All during this time, the telescope must gradually and precisely move to follow the object across the sky. There’s very little room for error.

Another factor is focusing. It’s challenging to focus on something that you often do not even see in the viewfinder! There are some tools available to help with this, but it can still be a time-consuming, trial-and-error process.

Finally, I’d have to say environmental conditions are a major factor. In the winter, operating at –20o C can make cables, machinery, and electronics behave in odd, frustrating ways. In the spring, overnight dewing tends to soak everything, including your lenses unless you take corrective measures. In the summer, short nights and hungry insects are the biggest problem.

And in all of this, there is our sky conditions. This is not the best part of the world for doing astrophotography (Ottawa, Canada). Our air masses can and do move rapidly, causing turbulence and frequently changing conditions. The jet stream just seems to love to throw weather systems our way, one after another, and often in very short timeframes. Turbulence in the air causes stars to bloat out in your images and washes out fine details, making it appear as though you are looking through a dirty window. 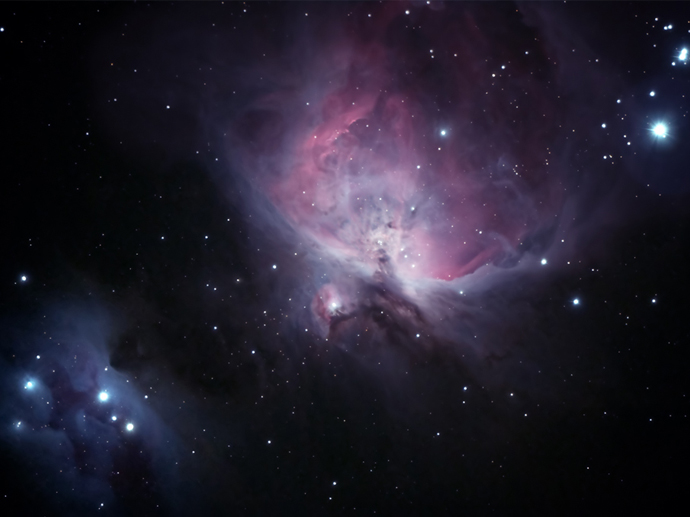 MB: With Canon releasing its 60Da camera, aimed for astrophotographers, do you think there will be many new enthusiasts aiming at the sky?

PK: I think the Canon 60Da could certainly increase the number of folks interested in attempting astrophotography. It has a number of built-in features that very favourable for this pursuit. And there are certainly some forms of rewarding astrophotography that you can do just by mounting your camera on a tripod and tripping the shutter with a timer or remote release cable. However, for the majority of astrophotography work, there is so much more involved that just the particular camera that you’re using. The telescope(s) that one uses, along with advanced image processing skills, are a big part of this game.

MB: You must have been surprised more than once while developing your images…

I also like mysteries. I’ve taken a couple of astro-video sequences that captured objects I can’t explain. One was of a satellite-like object that sailed through the field I was imaging. When I calculated its apparent orbit, I found that it was a long way out, even beyond the belt of geosynchronous satellites orbiting the Earth.

This is an area of space where we don’t tend to put a lot of satellites, so it struck me as odd. I asked a friend who loves to do satellite tracking and has access to numerous databases of satellite orbits to check this. He came back and told me that there were no known matches, at least in the data that was available to him. Very odd.

Another strange one was of an object I filmed while shooting an aurora on video. When I reviewed the footage afterwards, I discovered an odd object in the sky that just appeared to materialize, stay visible for a few frames, and then just dematerialize or “wink out”. Very odd as well. I’ve come to the conclusion that it was either a rare head-on “point meteor” or a Romulan warbird temporarily de-cloaking to beam someone up or down.

MB: What was the last thing that stimulated you?