His name may not ring any bells, especially if you’ve never attended one of the numerous exhibitions he curated during his years at Union des Arts Décoratifs or more recently in his new position as curator for Paris’ Galliera Fashion Museum.
But his appreciation, his judgement, informed by an impressive culture and understanding of fashion in the long run,  leave little to doubt.
Who better to evaluate the young talent of tomorrow than one of the few people who get fashion beyond the trends of the moment ?
Days before his double Comme des Garçons / Balenciaga exhibit opens at Cité de la Mode, here is Olivier Saillard.

Why should a garment be considered as important?

At the risk of appearing a bit primal, because we’d be a bit cold if we had to live naked, unless we all moved to warmer pastures !

Beyond climatic considerations, I love to see a garment as a solution, and to note that some designers are, to this day, still preoccupied by the idea of solving, through a way of dressing, our natural morning wardrobe.
You have produced works that straddle the line between fashion and performance. Or maybe there is no line. When looking at the collections for the festival, how important is the element of presentation to you? Would a poor presentation of a great garment influence how you score it?

Now more than ever, presentation interests me less than the garment itself. I skip fashion shows and rather appreciate presentations in show rooms.

Thus, there is no way of cheating. Presentation involves the image.
Today a fashion show lasts on average 7 to 11 minutes.
In the 80’s, it lasted 40 minutes, and in the 50’s, over an hour and a half.
That means that means that the live fashion takes as long to watch as what you’d see on the internet.
This tyranny of the image, which is killing ambition in dressing at the profit of sensationalism, must be avoided, except when it is claimed as part of a project.
A bad presentation cannot influence my perception of the garment, but can make me doubt as to the ability of the designer. 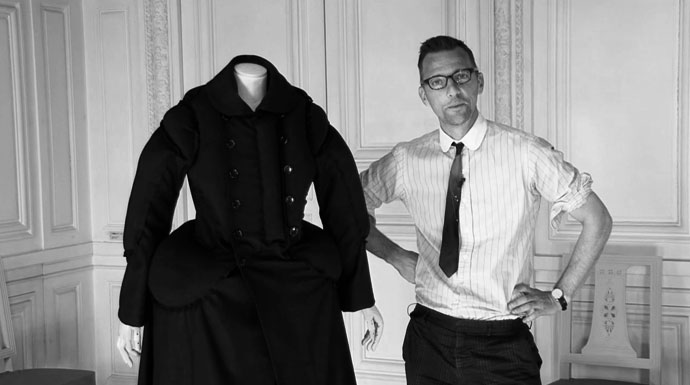 You have seen up close so many historical costumes and clothing that were at the forefront of fashion techniques and technology of their era.

On the flipside, what do you think the is the most advanced or intriguing technique or aspect in fashion that is available now that wasn’t in the past?

It seems to me that only Azzedine Alaia is technically a virtuoso.

Comme des Garçons, Rei Kawakubo and Junya Watanabe seem to always open new paths of research which, without having to do with Haute Couture, enrich the formal and technical vocabulary of fashion. I also see in Nicolas Ghesquière an obtuse talent to renew textile research, to make it contemporary for good.
But I must admit that it’s in the realm of athletic clothing that the research is pioneering and democratic.  It is regrettable that the stylistic vocabulary is subpar to these discoveries, which make the garment thinner, lighter and more efficient. The motifs, as well as the cuts, are awe-inspiring.
Fashion has been an immediate transmitter for new ideas and a proof of social and cultural evolution.
for quite a while now we experience fashion is recycling itself in an ever faster cycle, to a point where almost anything goes.
looking at history, how would you analyse the role of fashion today?

This constant renewal, whose sole function is to develop sales, doesn’t affect the silhouette as we would think.

It takes in fact years for a trend to register and take root.  It probably took over 10 years for the low waist to make its way in everyone’s closet.
It will take as many years for the waistline to return to normal.
Fads seem as epiphenomena in comparison to the constrained silhouette of our current wardrobe, and which was born at the end of the 90’s.
There is a paradox between a “fashion for all” universe made possible by big democratic brands who follow very closely the shows of influential designers (who may also be watching) and on the opposing end, a sort of disavowal of the mainstream public for fashion creation (fed by the media who are tied hands and feet to the advertisers). As in other disciplines, there is an abundance of shows and designers whose creative ambition is relative. Truly interesting collections are drowned out and deprived of the attention they deserve.
As an aside, there are no “damned” designers whose talent is being ignored. That is one thing worth celebrating.
Could you comment the extent to which today’s fashion apparently is getting more influences from within fashion than, for example, other realms such as history or history of art?
It is true that there is in fashion, as in other artistic disciplines I must say, a sort of inbreeding,
By dint of quoting and holding up mirrors through internet and twitter, fashion houses are disappearing into their own reflection, and in the end are making interchangeable creation a standard.
That will be probably be the identified “evil” of the 2000’s and 2010’s. The monopoly of luxury brands and groups has brought to light their formula.
I believe in the return to the designer as creator as I believe in the sovereignty of the author.
There are in fashion some immediate boomerang effects which protect fashion from the mechanics which businessmen would want to duplicate.
On the other hand, I am wary of the proliferation on each street of boutiques which are destroying the determined gaze which we could have on fashion creation. This over-abundance is the source of its own disgust.
What is the last thing that you experienced, saw or heard that stimulated you?
Generally speaking, only the past stimulates me.
The tyranny of now, as it is fed by the internet, puts me off.
I find all the people who live off novelty a bit sad, because I recognize nevertheless a lot of wasted work and energy.
What stimulates me are positions of resistance such as Azzedine Alaia. That is what fashion history will keep. There is a deep necessity to break all the commercial molds to favor the growth of new names and new talents.
Reading is always a stimulating element to me. Recently, “Aurelien” by Aragon brought me much pleasure.
The book is, more than ever for me, a way to sweeten these considerations and a way to remind ourselves that thinking can still be a creative program.
Far removed from this, what stimulated me more than anything is my sister’s recent move to Saintes Marie de la Mer [in the Camargue region in the south of France near Arles]. Everything morning she crosses the road to go swim. Right now I see no better wild project to be happy.
Comme des Garçons White Drama
Cristobal Balenciaga
opening Wednesday April 11 at Cité de la Mode/ Galliera
1 Comment
0 Likes