It has been one year now since I moved to Ottawa, Canada. During the past year I’ve come across a few people who are always trying to make the city exciting. Guy Bérubé, a good friend now, is one of them. He owns a gallery – La Petite Mort, a place where taxidermy meets with iconic furniture pieces and fundraising art sales for several charities (including Guy’s own).
Far from presenting “Hockey art” or Canadian landscapes, in Guy’s gallery you will find work ranging from portraits of the city’s crack addicts by photographer Tony Fouhse, to poems on pieces of cardboard by Crazzy Dave of the Ottawa homeless community.
With the look and fame of a bad boy, I can only say that Guy is doing a great job for the art community in Canada: making art available and affordable to whoever is interested.
What was the last thing that stimulated you?
It happened here in Ottawa, it happened to be a lesbian wedding performance by former American prostitute and porn star turned performance artist, Annie Sprinkle, and her partner, hosted by SAWGallery. It was very interesting for me to see. They are already married, but they do an annual wedding with a theme, and this time here in Ottawa it was marriage to nature, and marrying snow. They are eco-sexual; they have sexual feelings about nature (laughs). I hadn’t seen Annie Sprinkle in over 25 years, and I had met her before at a performance in NY where she had a live orgasm on stage.
So, it happened next door to my gallery at St. Brigid’s (a deconsecrated Church), and a lot of people came, and they saw the look and the aesthetics of a wedding. Everybody wearing white, everything was beautifully decorated, the light was coming through the stained glass… but then the performance started. They rode a pile of snow, exposing themselves by lifting their wedding dresses, and then inserted icicles up their vaginas, as they recited their wedding vows.
That seems a bit unusual for the city…
I’m seeing change, slowly but surely, over the 10 years that I have been here. I know that I’ve had some credit for some of the change. I’m seeing a difference in the art that is featured in galleries, even the Municipal galleries are showing things from my artists. It is something positive; Ottawa is a city where there is a possibility of starting from scratch, even though you’ve seen it in other places. Ottawa is a funny little town, very voyeuristic; it’s like the dude at the orgy who complains about the bad drapes and doesn’t jump into the fun.
What would be a good example of this change coming from your gallery and artists?

The USER series by Tony Fouhse is a perfect example of what my gallery does, something of which I’m very proud. It was featured in New York Times, Japan Newsweek… people got it, but it was very difficult at the beginning; lots of people in the neighbourhood, politicians, people were very against the work.
What’s the deal with the stuffed animals?
Before I had the gallery I had the fake tortoiseshell lamp, which I bought in Paris, and then I bought, not knowing why, the baboon. I think I felt sorry for him, it was on the floor of a junk store and people were grossed out by it, so I paid $20. And so, when I got the gallery, a friend of mine asked me if I was going to bring the “creepy animals”. Then people just started bringing their stuffed animals to me, and it became a depository, kind of like an orphanage. You can bring your stuffed animal, but it needs to have a good valid story, like all the other animals there. I’m not online desperately looking for an owl! I don’t buy them. 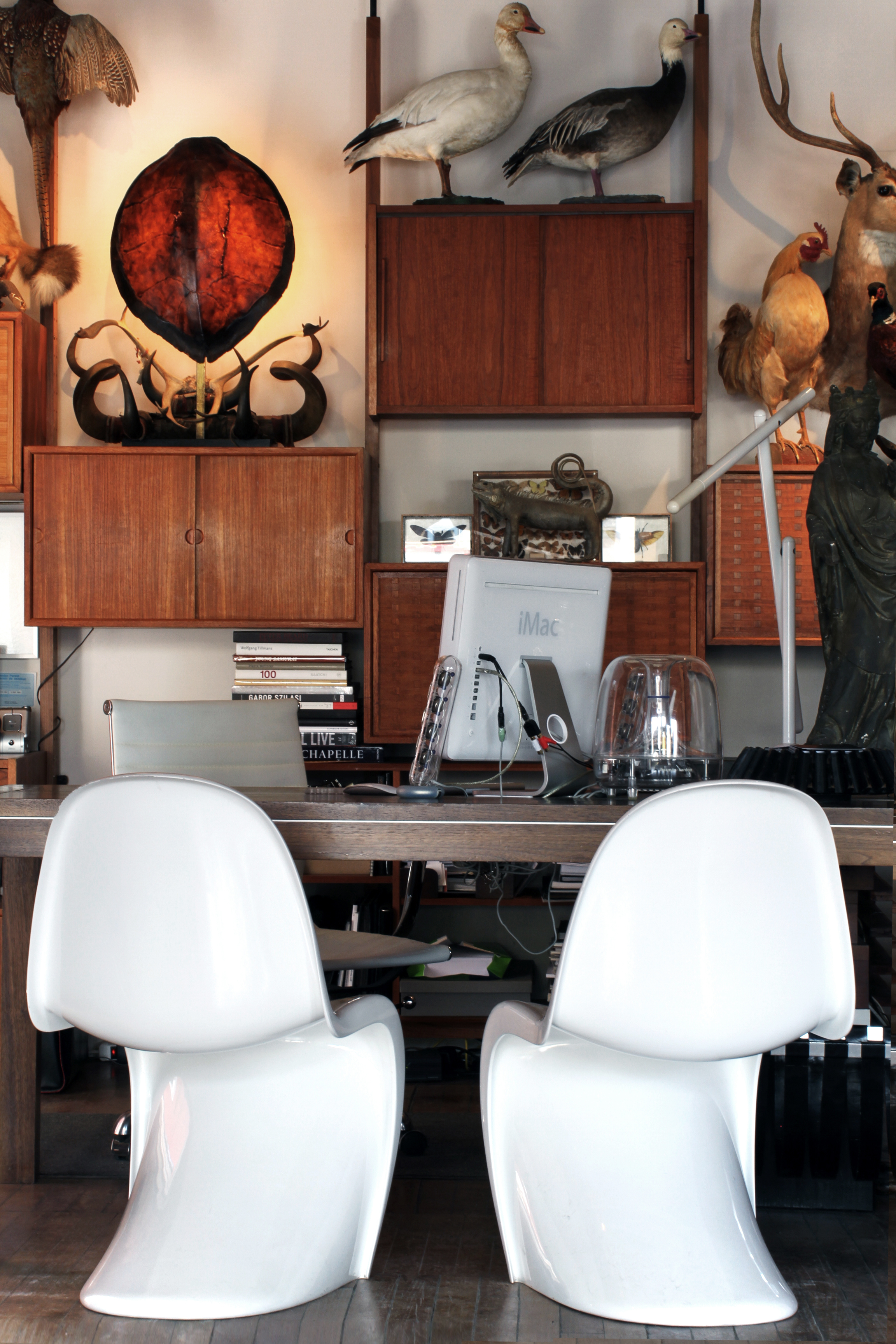 You must have some good stories…
A woman once told me she wanted to give me a bison’s head, and I have always loved the look of them.
So, we had a long conversation, and in the end she told me, “well, it hasn’t been taxidermied yet, it’s just the severed head” (laughs…) it was frozen!!!
Make sure to check out La Petite Mort
SLAVA MOGUTIN & BRIAN KENNY
September 2 – October 2, 2011
INTERPENETRATION
Photographs & Drawings www.lapetitemortgallery.com
0 Comments
0 Likes