Richard Gray is a Taurean – but don’t hold that against him. He studied modern languages at University but hasn’t spoken a word of it since. He loves fashion and carbs and not necessarily in that order.

He was recently followed into the men’s room at Claridges by Morrissey but nothing came of it. Richard owns his own teeth. He is not a virgin. He is however verging on the ridiculous. He writes lots of stuff on fashion for Sunday Times Style, 10 and 10 Men. He’s open to bribery.

RICHARD GRAY: Here I am

FILEP MOTWARY: Oh hi there, how are you Richard?
I’m great thank you. And you? This damn London drizzle is doing nothing for my hair however. It looks like a damn (Prada) mohair jumper…

Hahah, I saw your video review on Prada’s summer 2011 collection a few minutes ago. I was impressed how you pointed out its references. Really it reminded you of menswear?
And there it is: look at my forehead – it’s fuking scrotal! Anyway, yes, Mrs Prada says she gets dressed from the ground up – so shoes first – it’s a starting point for her. The shoes, the multi-layered ‘platforms’ took their cue from menswear, no doubt about that. The clothes, of course, came from elsewhere. BUT this perverted conceit, that cotton is a luxury fabric, is odd (in a good way). It’s political. She’s political. The price of cotton is through the roof! Rice, oil, rubber: the world’s commodity prices are skewed. This was perhaps on Mrs Prada’s mind at the time. She has a lot on her mind.

It seems that you are quite fond of Prada, why?
I think she only finds peace in original thought. There aren’t many fashion designers who share the same mind-space: Rei, Junya, Marc, Raf – we all know who they are. I also think there is something ultimately divisive about a house that caters to the bourgeois – a collective marked by conformity – yet bastardises old ideas/ideals. This is sinister. *Shiver goes down author’s spine*

I completely agree with you! On the other hand, I wish to ask you about the new and upcoming designers-if there are any since everything is fading away so rapidly. How difficult is for someone new to become an establishment these days?
Interestingly my assistant Lizzie(Hi Lizzie) went to the St Martins BA fashion design show last week. She said you could feel a move away from classics of the past two seasons and far more adventurous designs one the catwalk now. Good. I suspect however, that young design graduates have more of an eye for business than those of, say, five years ago. They recognize there’s validity in getting your clothes produced and people wearing them. And, more importantly, St Martins and London College of Fashion, the Royal College of Art etc. are now focusing more on the business of fashion. It’s still not easy for a graduate, but they are more business minded on graduation than ever before. Galliano (Yikes! I said his name) argues that talent will always be recognized, despite the difficulties?

You mean sooner or later? But, should a young creator first get a job in a big house (as a major designer once told me) or it would be better to try the solo route for starters?
Yes. He uses himself as the ultimate argument that you can fail and fail again. And finally, finally, if you keep trying, incredible talent will be recognized. Not sure how this theory goes down with those who have ended up bankrupt and broken by fashion… The route to success depends on the opportunities that come the young designer’s way. You take somebody like Christopher Kane who did things the textbook way – managed cleverly by his sister Tammy. He’s proved you can do it. He’s a great message for London fashion. Then there’s somebody like Peter Copping, who, I think is on the brink of the global recognition he deserves. He served at Louis Vuitton with Marc but kept under the radar, yet produced some wonderful designs. Now he’s doing wonderful things at Nina Ricci. Both routes can work. Both routes have their own advantages and disadvantages. One thing: being a success in the fashion design world is damn hard. “You pay in sweat!” (See start of ’80s TV horror, Fame for more inspirational advice) 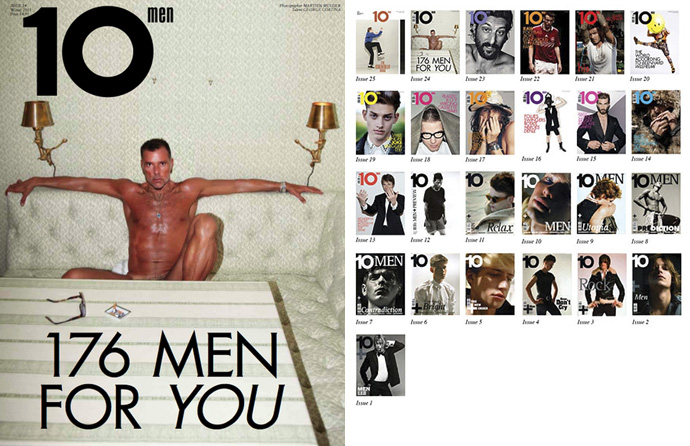 I wanted to ask you, if I may, about your opinion on John Galliano, since his name came up…?
The man is clearly not well. He needs, and I hope he’s getting, help. His comments were HORRIFIC and INEXCUSABLE.

But he was drunk…
Do you say things like that when you’re drunk?

Νο, not really, I am very friendly by nature, so not really the case for me. But indeed I witnessed people becoming monsters with the help of booze. He deserves a break…
The courts will decide his fate.

How about the re-launch of Mugler Homme?
I see the boy who wears it when I see the clothes. That’s Nicola and the team: focused. He knows exactly who he’s speaking to. If he’s clever we could see a new Dior Homme. BTW. I’m back in love with Dior Homme.

Yes I think Dior Homme has become so relavent again, only because he gave a completely new man’s outline and figure. I think what he does is fresh, any many different body types can wear them..
So, how do you see magazines, fashion magazines now? Especially men’s. You work as the contributing editor for 10 Men…
I picked up Japanese Men’s Vogue the other day and got excited. The pictures seemed to have such ‘worth’ when I saw them in print; as did the words. Not sure what I mean by ‘worth’: it could either be ‘worth’ as in I’d just paid £5 for the magazine. Or, ‘worth’, as in it seemed to be less throwaway than fashion images you see online. I think online is the future – no two ways about that – but glossy paper bestows words and images with something a computer screen cannot (YET!). Technology is moving so quickly. Look at the mobile phone you had five years ago and look at the one you have now. It’s not a phone it’s a computer. You can read magazines on your phone. You can order clothes, food, sex, and the world on your phone. I look at sites like Showstudio.com, your site, the 10 magazine blog, the absolutely brilliant American Vogue.com and the hugely successful Sunday Times app, and think: Now this is interesting.

Im wondering how fair the future will be for the clothes themselves, as people will not be touching, feeling or trying on before buying them. I think there will be a lack of how things used to be..
I like the idea of ‘fair treatment for clothes’ – I see placards and a march through Oxford Street: ‘Denim deserves more’. ‘Hems have rights too – back off Kawakubo!’. Love it. You have a point though. Are shops merely becoming showrooms for brands? Online sales are rocketing – ASOS posting a whopping 142% increase in international sales. Because I have a huge head and ridiculous squat body, I have to try things on before I buy. I can’t buy online, unless I try in the shop first – use it as a changing room – then order online. Somebody was telling me that the most important luxury customer in the world is a 23-year-old Chinese man – it’s young Chinese men who are buying branded designer bags. $$$ Kerching!

Yes, its less romantic these days isn’t it? I so enjoy stepping into a boutique trying stuff.
Me too. No harm could ever come to you in the Balenciaga boutique. God designed that shopfit. You’re right, online retail is less romantic. When I was young in about 1903…(1988) the local fashion boutiques were the epicenter of fashion life. It was our only contact with the Paris catwalks – there was no Internet, just magazines. People, who worked in shops, dripping in Helmut Lang and Yohji with black bobbed hair and a smash of red lipstick, were fashion heroes. I used to watch them and love them. I wanted to be them. Walking round a minimal boutique with white washed walls and snotty staff was/is wonderful. Let’s bring it back. Now.

Richard, how it all started for you, I’m curious to know…
I did modern languages at University, then, when I graduated I needed a job so worked in Harvey Nichols in the north of England, in Leeds. I was always fascinated by fashion and used to spend all my money on clothes. I remember fainting in a German lecture because I’d only eaten bread for a week – I was so desperate to buy a Dries Van Noten shirt. Anyway… at Harvey Nichols, I somehow managed to flirt my way down to work in their press office in London. Then worked my way up, then went to 10 magazine, then worked my way up, now I’m at Sunday Times Style. Maybe I’m, channeling those powerful bitches with the bobbed hair in Helmut Lang and Yohji who worked in those fabulous local fashion boutiques?

I love your story! Short and very to the point. I already have an image in my head…
So, one last question, how do you see the future of fashion. Can you suspect how it’s going to be in ten years?
And what a question. More of the same: change! I see more collections dropping throughout the year – not 6 but 12! Perhaps more. Customers are hungrier now than ever before. I see collections sold solely on the internet – cutting out the store and the costs stores incur. I see collections tailored to local audiences: girly and pretty for China, covered up for the Arab world and coats with pull-out linings for desert climates. Burberry appears to be leading where other designers/retailers follow: customers can now order direct from the catwalk. Then you get the radical element which are focused and reject the new emerging retail trends: Tom Ford. No pictures. No tweeting. No blogging from the shows. Customers see the clothes just before they hit stores. It’s the old new way. And it’s fascinating.

What was the last thing that stimulated you?
This picture of Isabella Blow at her wedding in 1988 to husband Detmar. A troubled woman from another place. 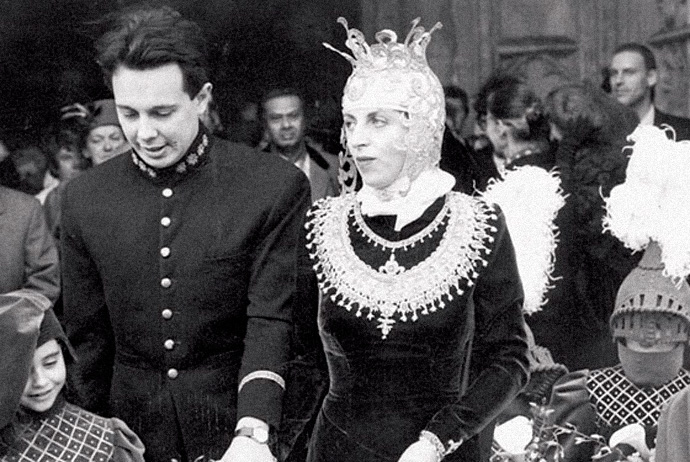