The future is back.

ANTOINE ASSERAF: I noticed everything is looping, there is no beginning and no end. What as your intention with that?

MATT PYKE: One of the reasons for the looping is we’re really interested in the idea of infinity and how it creates video artworks which don’t really have a narrative story to them.

We’re creating almost a video sculpture, a state of mind or a trance-like situation: for example where dancers that are continually struggling up the wall to get to the sound or the giant walking monster in TRANSFIGURATION which is walking forever and nobody knows where he is going.

It’s that idea of foreverness and how you can use video to do that as an artwork that never stops: everything is almost like a machine that is going and going…

Sometimes you have some very un-digital elements like drawing.

I studied drawing and painting at art school and still find it very important to have a pencil as well as a computer. All of the artworks were based on drawings originally. The archive of the Gaîté Lyrique has a collection with all the working drawings from all the artpieces.

In the exhibition, the one called SEVENTY SIX SEEDS was entirely created through drawing but influenced by the more recent years where i’ve been working with people who use codes. The drawings are very much influenced by digital processes and the shapes that code make.

We’ve made an iPhone application that gave me kind of genetic instructions of what type of seed what type of plant to draw every morning- so it’s a way of using technology to control me, control my pencil.

Do you code and program yourself or are you trying to bring that kind of “old school” thinking into that?

I think one important thing is, by me not understanding code, that my ideas are not restricted to what is possible.

How did you first started playing around with this digital universe?

One of my first influences was partly due to my brother learning to write electronic music when he was very young, so we got interested in music technology. It was just before the Mac really arrived in the 80’s – he got his first sampler when he was around 10 and twas trying to make beats.

I’ve always been interested in the forefront of something: the forefront of music or the one of science. Technology is always been ahead in terms of CGI in Hollywood films and using the power of a laptop to create digital music or animation. I think I just get excited by these new tools emerging. Every year there seems to be a new, more powerful tool that Steven Spielberg or James Cameron work with and we can use a few days later. (laughs)

I feel like in the 90’s the people were very excited about the future and the digital arts and things like this, but then it had kind of taken a back seat in the last decade were people were more looking backwards.It seems now people are looking more ahead again and say: what can we do that has not been done?

That is something we’ve talked about a lot recently is how there is obviously a lot of negativity in the world at the moment about with what is happening in Libya or Syria or the economy and the environments. Naturally bad news is what sells papers but I think on the other side of that we see technology as something very playful and something you can use to create very positive, utopian experiences and it’s really something that can save mankind. That is something I really wanted to explore in our work is how you can create this super positive energy and use it to hopefully influence the people who visit the exhibition. Because it’s kind of celebrating how technology can enhance your life.

Going back to the vote against technology: there is a big movement of paper-craft design and all these — because I studied painting and drawing originally, my heart still lies in handmade and analogue processes. My studio is in the nature in the North of England, is very much part of me and what I see — I don’t live in a big design city kind of environment.

But I think there is always action and reaction. At the moment we see it as “let’s try and do something which is in reaction to this kind of organic and analogue approach and try to do something with technology that excites people and does not feel it’s about closed-circuit TV and surveillance and all this kind of negative things.” 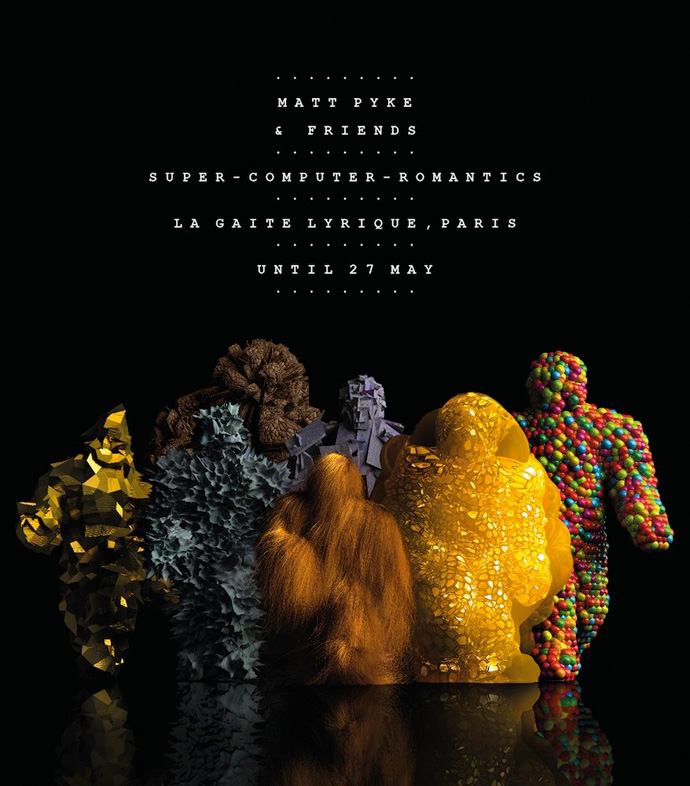 Do you know the work of Nick Cave- not the singer but the other Nick Cave- the artist?

What is its called? SOUNDSUITS! I tell you where I got the idea from for TRANSFIGURATION:

Originally it was used for MTV, but the idea came from searching on Google images for “fur”, CGI-fur, and I found one image which is some random test from some crazy tech-forum image of a guy who got a stick man and wrapped some fur around him. Just this really tiny CGI test and we thought lets take that small experiment or test and turn it into this kind of bold living thing for MTV. From that we took the part which is the most popular across the web and turn that into more a story of evolution for the gallery. But recently I saw on twitter someone mentioning Nick Caves SOUNDSUITS- and I was like: Ahhh interesting parallel! What I really like about that is the fact that two people have come to a similar direction, his is analog and ours is digital. But it’s very very hard to make something completely original and unique these days;

Yeah i’d love to see them- I know he is based in Chicago. I’ve seen the films and images on the web. It’s just nice to see these parallels…

Do you actually have things that actually function interactive? I mean there is some interaction in the sound room system…

That is a good question the interactive one, because people have asked us a lot is, as we’re in a digital gallery, if we’re making interactive works, and I think I would not really call myself an interactive artist or a designer. There are certain things we’ve done with real time video mirrors and things like that but generally I prefer the word “participation” where you can involve the audience in some way even if that is them just standing there in a trance watching it or dancing to it in the Petite Salle or the Chambre Sonore…

Yeah — it’s great! That is what we predicted what people would do. It’s a subtle way of creating some interactions.

There always seems to be a big expectation for digital things to be interactive and I quite like the idea, personally as a member of the audience, that you don’t have too work hard.

Some of your pieces have an intelligence to them, they do react but they react with each other…

They interact with themselves! Yeah they are more self absorbed! (laughs)

Matt Pyke / Universal Everything / Everyone Forever