Caroline Daily interview of Antoine Asseraf about “La Lutte de L’Amour” (The Struggle of Love), the SS2011 film he made for Erotokritos.

Caroline Daily: what is the first film which made an impression on you ?

Antoine Asseraf: The most striking memory for me is David Lynch’s Lost Highway.
It was my first Lynch, and the mix of glamour and goth, the changes in personality, the concept of looping, free intepretation, all left me without voice.

With David Lynch, there is always a staggering artistic direction, a mix of architecture, music, design and casting which create entirely novel worlds.

In a different register, there is also Danny Boyle’s Trainspotting, which left a mark because it’s such a violent film, but with an “english” type of violence – very different from the hollywood violence to which i had grown accustomed. 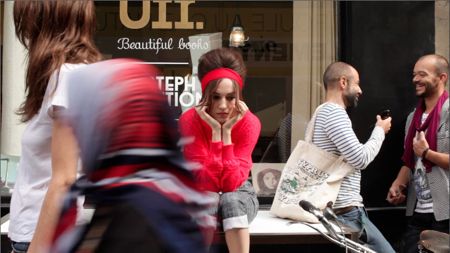 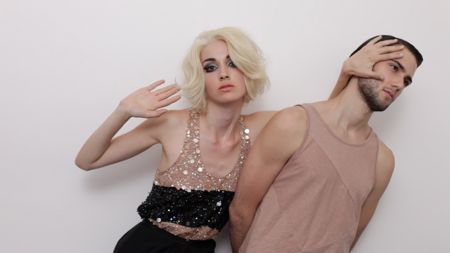 cd: this film for erotokritos is filled with references to classic cinema, what are your cult movies ?

Well of course Lost Highway, you can find in “La Lutte De L’Amour” the splitting of personality between the blonde and the brunette, who may or may not be the same woman…

There is also a film I had seen for a class on cinema which had struck me by how conceptual it was : Suture, where the main character is perceived by the other characters as white is played by a black actor, which creates a very disturbing offset between the spectators and the film’s characters. I attempted to do something similar in “La Lutte De L’Amour” with the voice-overs, which get gradually describe the image less and less.

I really love all types of films, but as strange as it may seem, the films that have followed me around the most are the ones I saw dozens of times as a teenager, and therefore not necessarily great classics… My classics are rather “The Addams Family,””Addams Family Values,””Priscilla Queen Of The Desert,” the films of John Waters and early Almodovar. Very kitsch, very camp comedies, whose one-liners still make me laugh. I think that’s why I couldn’t resist making a cheesy joke with “skull” and “skullhead.”

cd: why a struggle ? what is the message of this film which seems like a double-edged sword, between lightness and madness ?

At the heart of this film, there are Erotokritos’ moodboards, with pictures from Godard’s “Contempt,” but also the imaginary universe of his brand and above all, his name. The name “Erotokritos” comes from a famous epic poem of the Greek renaissance, and means more or less “struggle of love.” So I imagined that this could be the title of a Nouvelle Vague film about the vagaries of a Parisian couple… It seemed essential to have a contrast, a tension (between “love” and “struggle”), to avoid falling into something too honeyed or too “costume drama.” 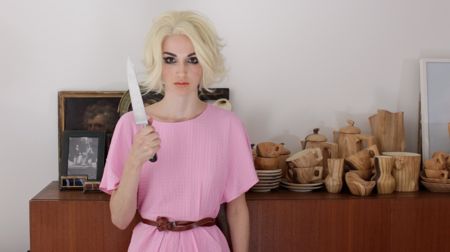 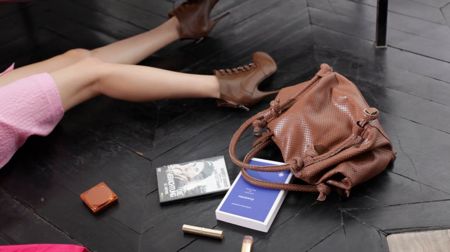 cd: for this film and in general, what are your sources of inspiration ?

For this film my point of departure was the trailer for Contempt.   Each detail was thought out. With this short, I wanted to do something rich, that you could watch several times, noticing new details with each viewing. I’m a bit of graphic designer, so for the lettering, I used the actual letters of LE MEPRIS to write LA LUTTE DE L’AMOUR, while the conceptual discrepancy between voice and visual spoke to my advertising side.

Inspiration comes from all over, and sometimes it’s difficult to concentrate on one thing, so I try to ask myself very down-to-earth questions : “what do we need,” “what are the strengths of the brand, the actors, the clothes,” “what tools are available.” It’s a bit the “Robert Rodriguez school of filming” : we have a car, two horses, a riffle and a belly-dancer – what kind of film can we build with all that ? 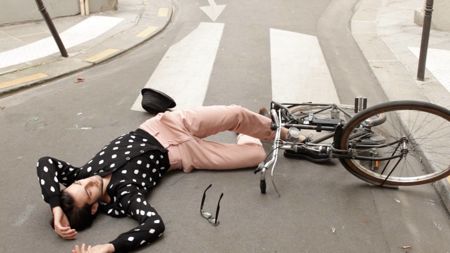 cd: what are your next projects ?

Well, there is the The Stimuleye.
I’m working on a series of interviews between Maria Luisa and different designers : Rick Owens, Haider Ackermann.
I’m working on a project for Viktor & Rolf’s Flowerbomb perfume.
I have to finish this Buto-inspired film, filmed in December.
And I just did the creative direction for a series of fashion films for Armani, which should come out soon…